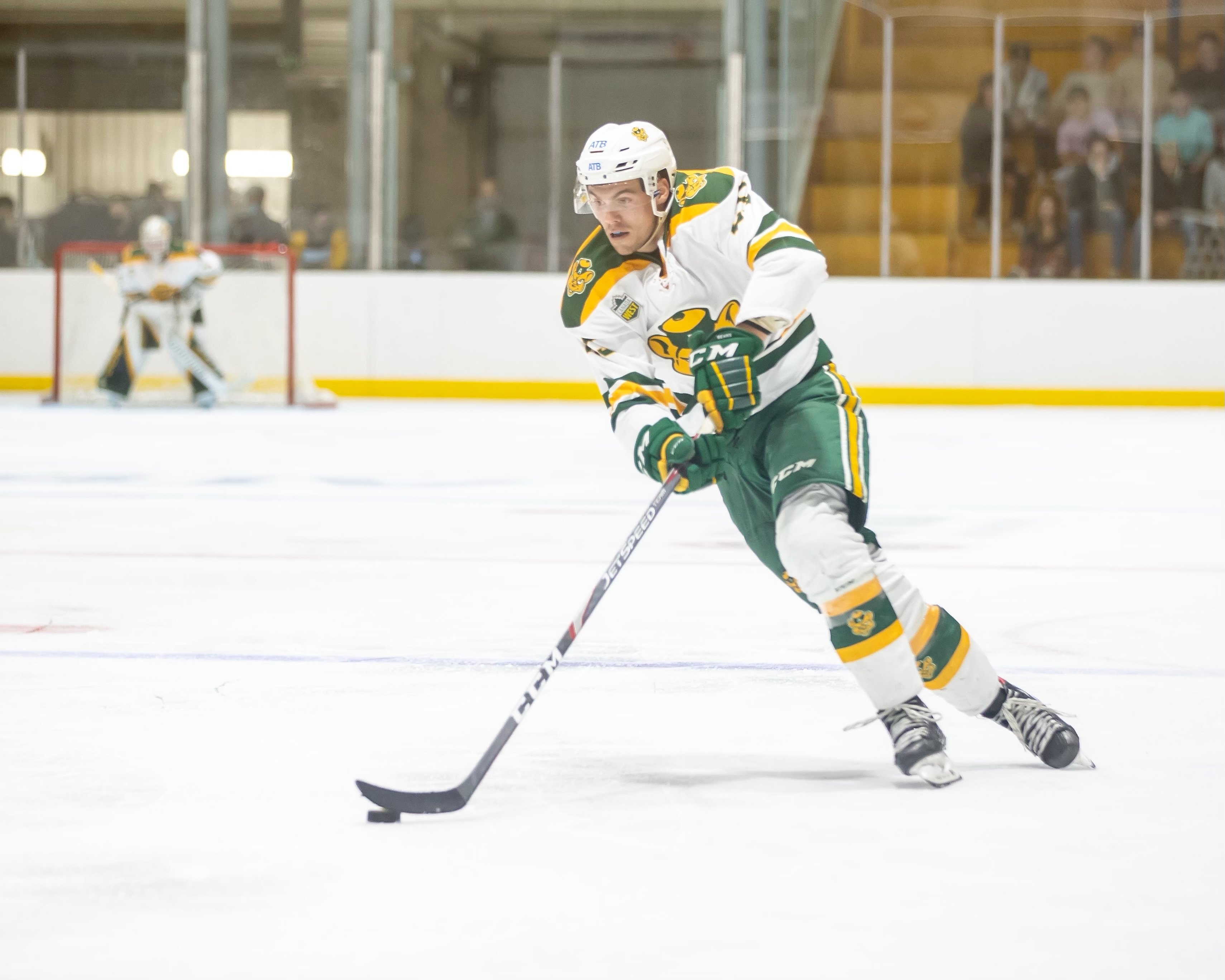 Matthew 5:16 In the same way, let your light shine before others, so that they may see your good works and give glory to your Father who is in heaven.

Luc Smith is living these words, from the mouth of Jesus, shining his light as a leader with the University of Alberta Golden Bears.

Smith, a product of Stony Plain, Alberta grew up in a house of faith. “I spent lots of time at the rink and at church,” said Smith. “From a young age, Jesus was my Lord and I had asked him at 10 to come into my life and I remember when I was like ‘I want this’.”

His family shared a vision for reaching the lost and at 12-years-old he served at an orphanage on a mission trip to Mexico. It was eye opening to see how God worked and it helped expand his perspective. The Smith family went back to Mexico on two other occasions and those experiences are cornerstones for his faith. It built his understanding of who God is and he grew in a relationship with him.

As Luc’s hockey career started to take off, he was drafted in the third round of the 2013 WHL Bantam Draft by the Regina Pats. It was then that Smith realized just how many times he lived off of his parents faith, and how they had modeled following Jesus. Obeying his Mom and Dad more than obeying God. At 16-years-old he made the jump to the Western Hockey League and began navigating the life of a christian hockey player. “That was my moment of knowing I needed to have a relationship with Jesus. It was where I learnt that there was a lot out there in the world.”

Luc spent five years in the WHL, playing over 300 games in Regina, Kamloops and Spokane, scoring 67 goals and 67 assists. In his final two years in the league he scored 20 plus goals. It was a critical time to grow up and figure out who he was and he did his best to get connected in a local church and attend chapels to stay connected to his faith. It was only by the grace of God that he was able to walk as a light in the hockey atmosphere. “Anybody would be lying if they said they didn’t want to fit in. But then you also have this internal struggle of what do I want to give up to gain some worldly affection. It was a navigation for me.”

Nearing the end of his junior career, Luc had an opportunity to turn pro when he was offered a contract by the Jets organization. But in the playoffs prior to the end of the year, he suffered a devastating knee injury and the door closed on the pro’s. “After I worked through some anger, confessed my anger and told God I was mad at him, he started to show me that I wasn’t in control of my path.” Smith decided to change directions, attend the University of Alberta and go through rehab there.

As he joined the Golden Bears, Luc was praying that God would move among his teammates. He answered those prayers by bringing Athletes in Action into his life and the lives of the entire team. “Athletes in Action is the community I need, these are the brothers and sisters that are going to help me grow and I’m going to be able to learn and we will grow together.”

Now, Luc is a student leader at the University of Alberta. Leading chapels with his teammates and living out his faith. His circle of influence has expanded beyond the dressing room. “It’s been a growing experience and a testament to the grace of God and ultimately I’m trying to bring Him glory through my actions and anywhere I have influence.”

Luc recently took the next step in his faith and decided to get baptized in January. “It was awesome, a really special night.”

Luc is letting his light shine at the University of Alberta, just as his Savior calls him to.