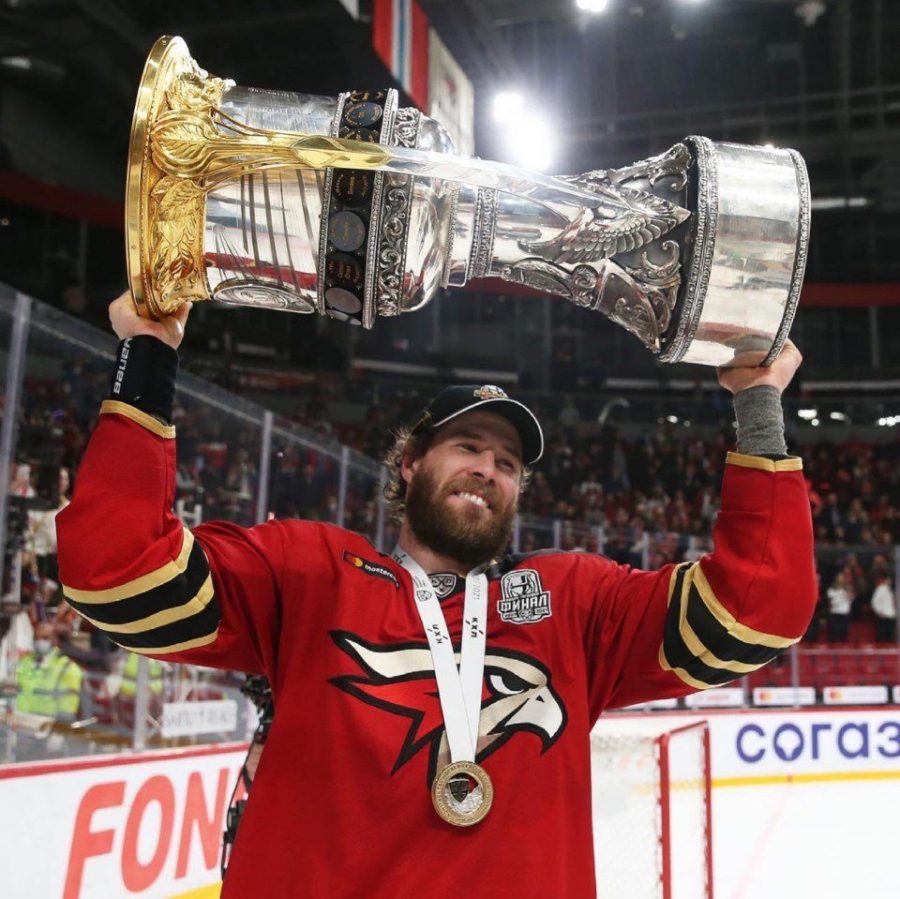 “Seek first His kingdom and His righteousness and all these things will be added to you.”

Corban Knight, three time NCAA Champion, nine year professional in the AHL, NHL and KHL, Gagarin Cup Champion in the KHL, and now Canadian Olympian, has his eyes set above.

Corban and Team Canada have just finished competing at the 2022 Beijing Olympics, the pinnacle of any hockey career. It’s an opportunity that the 31-year-old relished, and appreciated the journey to get here, in sport and in faith.

Growing up in a Christian home, Corban made his faith his own when he left home at 19. “I’ve had a lot of moments in my walk and my faith where it’s been huge for me,” said Knight. “If there was one moment where I really understood the importance of it and how important it was to me as a hockey player and a person was probably when I left home for the first time and went to college in the US. That was a big thing for me, leaving home and that bubble with the security blanket of your family and friends. That was a big moment, having to figure out if I was going to make my faith personal, or was it just my parents faith. That’s a moment I look back on that was a pretty vital part of my walk.”

His career took off from there. At the University of North Dakota, Knight won three straight NCAA championships from 2010 to 2012 and in his fourth year, was a Hobey Baker Award finalist and named Second Team All-American. Knight was drafted by the Florida Panthers in 2009, and was traded to the Calgary Flames in 2013. His pro-career in North America included stops in Calgary, Florida and Philadelphia, splitting time between the NHL and the AHL.

In 2019, Knight signed a contract in the KHL and moved to Russia where he is playing his third season. In his second year, as a member of Avangard Omsk, Corban lifted the Gagarin Cup as KHL Champion in 2021. And through it all, Knight has always had the Lord with him.

“Life throws you a lot of curve balls… If you don’t have that firm foundation, that faith to rely on and fall back on, it can be a bumpy ride. There’s a lot of instances where people you think have it all figured out, crash and burn. I think for me, my faith and my journey, that’s been the biggest part for me, always having that rock to fall back on whether you are in one of the valleys of your career or even in a peak. It’s always been so important for me to always have that constant rock to rely on.”

At the time this interview took place, it was less than a week from when Canada would hit the ice for the first time at the Olympics, taking on Germany. Corban couldn’t believe this was happening.

“It’s pretty crazy, still hearing that, it hasn’t really sunk in yet. It’s such a huge honour and to do it for Canada, it means the world. Trying to savour it as much as I can. Growing up, the dream is to play in the NHL, but I think for any Canadian kid growing up, I remember 2002 in Salt Lake City with Mario Lemieux and Joe Sakic and all those guys and then obviously 2010 in Vancouver. Those were pretty huge cornerstone moments for any Canadian kid growing up. This is almost on another level because of how rare it is and to get the chance to do it, it’s just incredible. I think it definitely means a little bit more than any of the other achievements.”

Corban had been ready to dawn the red and white and compete for a Gold medal at the Olympics. It’s all for the glory of God, not the fame and recognition, but for his Saviour who has brought him through thick and thin to this pinnacle of competition.

“There’s been ups and downs and things that have tested me. I am so lucky and blessed to say that I have come through those times, certainly not by my doing by any means. I certainly wouldn’t be where I am without my faith and the Lord guiding me through this.”

Corban’s final quote rings especially true now as earlier today, Canada was eliminated from the Olympic tournament. Corban, like many other Christian athletes at these Olympics who have experienced loss and disappointment, will once again have the opportunity to look to the firm foundation of who he is in Christ.