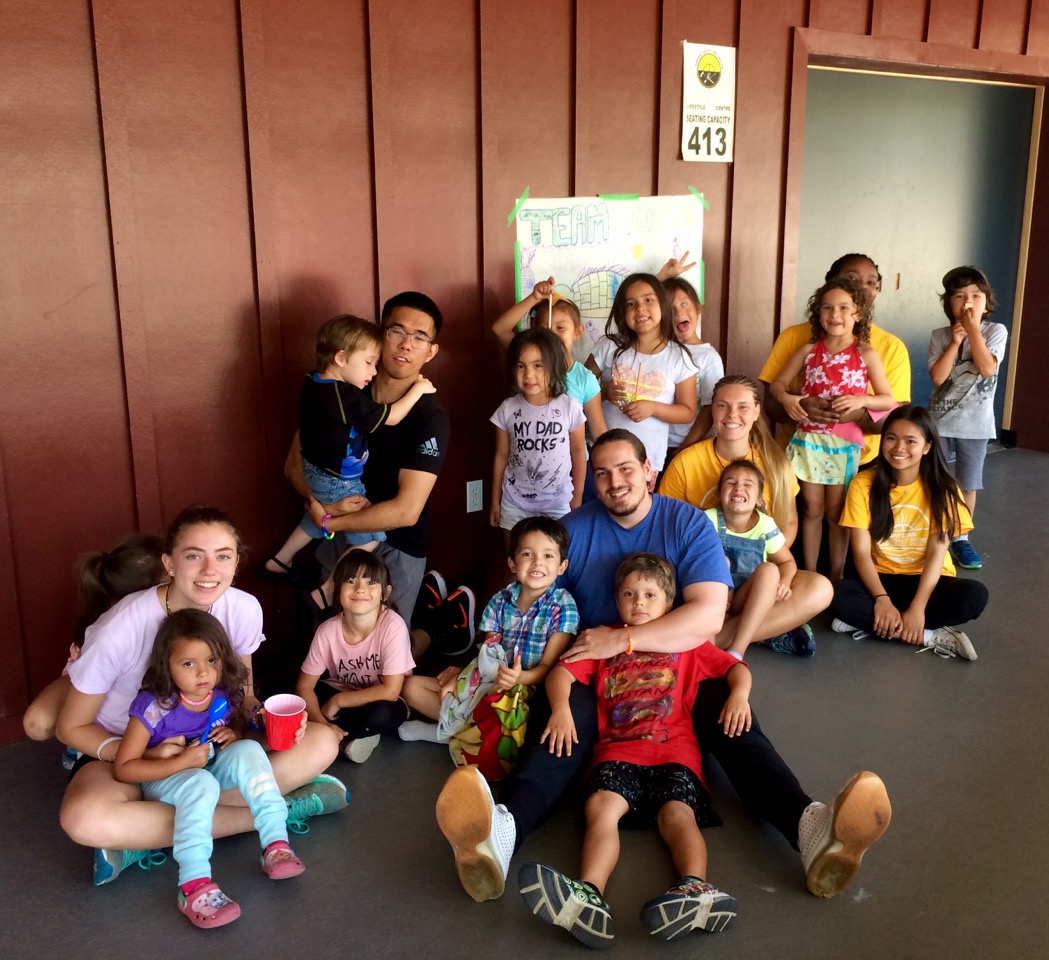 As soon as you set foot in Shamattawa, you can see brokenness in the community. Houses are painted with graffiti, windows are smashed, and trucks with slashed tires are left abandoned. I had no idea what to expect. The first day we were there we had only a few younger kids show up. These kids were beyond excited to get to play in the gym with us.

As word spread, more and more kids showed up every day. They were hungry for love and attention. All they wanted from us was to play games with them. I picked a kid up one day and “flew” him to the other side of the gym like an airplane. A simple action like that had many kids lining up to be next. The smallest things gave them so much joy and made them feel loved. We taught them games that they had never played before and every day they would ask to play them and wanted us to teach their friends. Playing with these kids gave them an outlet from their regular lives. I asked a 19-year-old boy what we could do to help Shamattawa’s high crime and suicide rates. His response was “I think we need to get organizations like Athletes in Action up there more frequently.” He also mentioned that the problem wasn’t necessarily with the super young kids. His words were “The little kids are the least of my worries. They just play around, and it doesn’t really matter what they do. They don’t know how to get into trouble yet. The area that we need to target to help Shamattawa are 12-19 year olds.”

In the late afternoon, we would have open gym for kids this age and older, where we would play pick-up basketball with each other. We had people of all ages come out to play: kids 12 years old would be competing against 30-year olds and couldn’t get enough. Coaches were really able to build connections during this time. I got to know quite a few of the kids really well. We were able to foster these relationships outside of the gym too. I was fortunate enough to talk to quite a few of them about Jesus and got to know where they were at in their faith walk. I felt honoured that they felt comfortable enough with me to open up about their faith. By connecting with these teenagers, I believe that we gave them a vision that post-secondary education is an option for them too. Last year, for the first time ever in Shamattawa, we had two brothers graduate from high school, both intent on pursuing a college education. I believe that the Athletes in Action staff had a huge influence on them. I hope that we are able to keep instilling hope into these kids, making them believe that they can succeed too.

During the week we saw potential in a few boys, and we asked them if they would like to come to our overnight camp at CMU. I think at first the two boys were hesitant and a little bit nervous. The boys that came were able to work hard, connect with other kids, and learn more about who Jesus is. One of the boys, Greg, made the amazing decision to recommit his life to Jesus at this overnight camp.

I believe that building relationships with people in Shamattawa is the key to sharing the gospel. It won’t be a quick fix, but the work that Athletes in Action does in Shamattawa will help reduce crime and suicide rates and bring more people to knowing and living for Christ.

I would like to thank you, Stu and Kim, for your donation that made building these relationships possible. You are making a difference in places like Shamattawa.

It started off as a tough week for us coaches; we had never really experienced disrespect from campers in any other camp we’d been to. At times it was really overwhelming, especially during the first few days of Coaches Corner, when we were trying to teach a bible lesson to a group of kids that either ignored you or talked over you. Through all of the not-so-fun times of coaching these kids though, God was right there with us, showering us with patience and love. A lot of campers at Serpent River come from broken families, so it was a privilege to be able to show them God’s love by our actions this week. It seems sometimes the worst behaved camps end up leaving a big impact on my life, and this camp definitely did just that. As my team and I reflected on the week during the drive home, we were amazed at how clearly God was at work in the community that week. Not only seeing a massive improvement in respect and attentiveness from the campers, but also them asking tough questions in small group and willingly and joyfully participating in group games/drills were answers to prayer for us. We also had the chance to hang out with the kids from this community in an out-of-camp setting, which was a great experience. We went to a canoe racing event hosted by the elders of Serpent River, and we got to race (and lose to) some locals. It was an honour to be invited to participate with them in their lives outside of day camp.

We had a wonderful week with the Athletes in Action team that led sports camp for us in Serpent River First Nation. The 4 students who came were a great addition to our team of 22 staff and volunteers who came together to prepare programs for the children, youth, and families in this community. What an amazing and busy time it was! We had 50 children registered for day camp in our first week, which may be record numbers for us in week 1 of camp! On average we had about 35 children per day, ages 4-14, attending day camp for the week of AIA sports camp. The children engaged in teaching sessions, drills, games, and other activities prepared by camp leaders and volunteers, which developed their sports skills in a fun environment, as well as Coaches Corner where children listened to testimonies and heard the message of God’s love for them. Through the relationships that are built during these summer camps, trust is built between the children and volunteers; God opened many doors for spiritual conversations to take place, which we are so thankful for. Aside from day camp, our team, including the AIA leaders, had many opportunities throughout the week to engage in cultural learning activities and discussion times, building relationships with each other and growing together spiritually. We are very thankful for Athletes in Action partnering with us as we continue to share God’s love in action and truth to the First Nations people here in Ontario.

Thank you, Stu and Kim, for making it possible for AIA join us again this year!