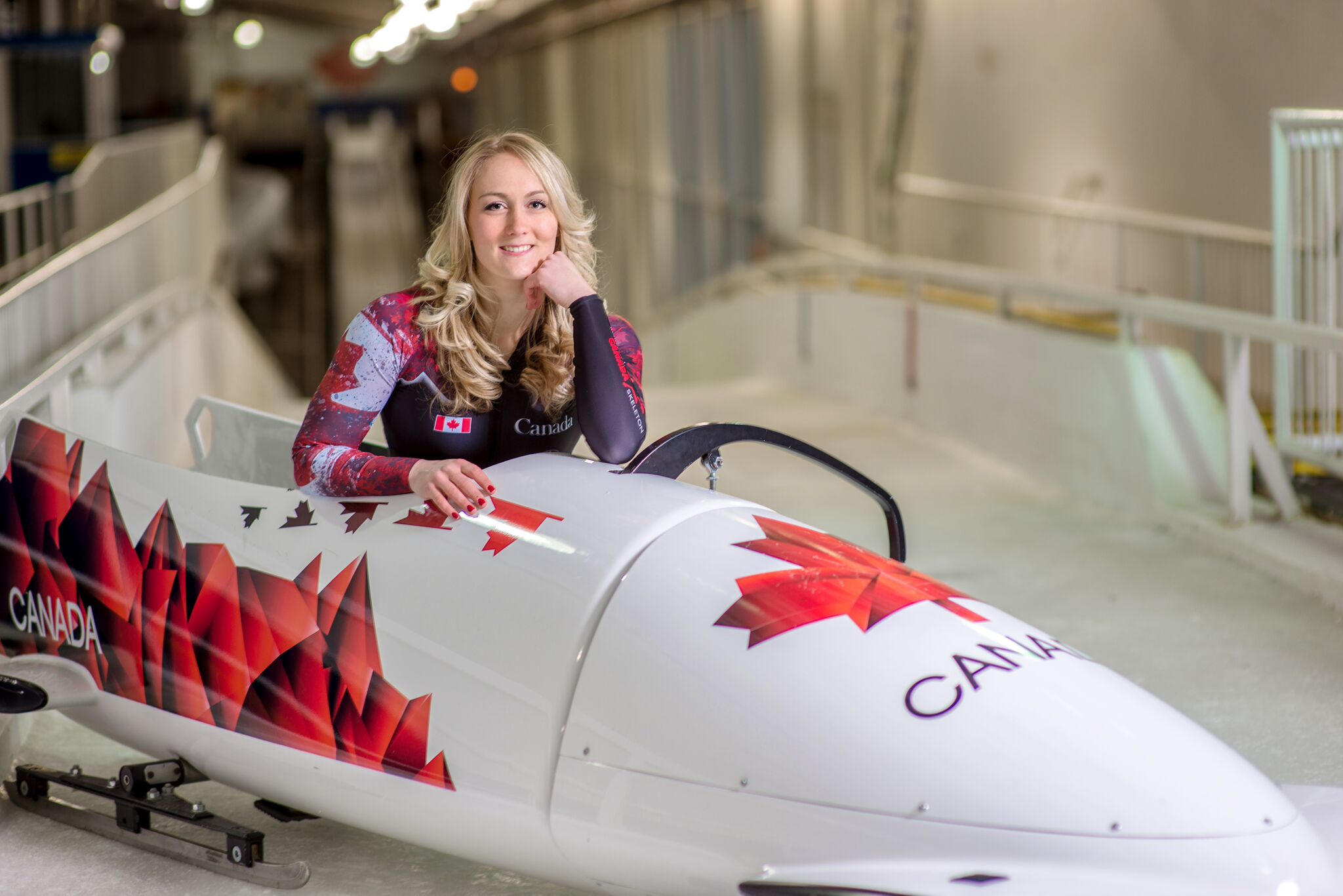 So the unsteady start to her bobsleigh career last season was difficult to take. Racing as a rookie with two-time Olympic gold medalist Kaillie Humphries, expectations were high, but they didn’t win a single World Cup race, and missed the podium entirely four times, sliding to a seventh place finish at the World Championships.

“Being in the position I was in, sliding with Kaillie,” Melissa recalls, “a lot of people said, ‘Expect to be on the podium every weekend.’ We weren’t. Looking back, it was an amazing opportunity, but it was also very overwhelming and very stressful.”

“It was a little bit surreal,” she adds, “I watched the [2014] Olympics in my basement. I watched Kaillie Humphries and Heather Moyse win gold at the game, then come September I met Kaillie, October I found out I’m sliding with her all year long, and now we’ve been sliding together for two years.”

This second year has been far better than the first. They have yet to miss the podium all season. With four gold medal finishes, they currently have a comfortable lead in the World Cup standings with one race remaining, and they just won a silver medal at the World Championships in Igls, Austria.

“To be able to come out this season, to be able to live up to the reputation of Canadian bobsleigh and to be able to go out and medal every race,” she says, “It speaks a lot to our development and it’s an affirmation that we’re going in the right direction.”

Melissa relied on her faith to get her through the difficulties of last season, particularly with how the bobsleigh season works.

“Last year we were essentially gone for four months,” she says, “So all of a sudden you’re away from your support systems, but the one support system that can be with you even if everybody else is in a different country or continent, God’s always there.”

“Being able to journal and pray helped me to get through those hard times.”

One Bible passage that Melissa has turned to often is Philippians 4:6-7: “Do not be anxious about anything, but in every situation, by prayer and petition, with thanksgiving, present your requests to God. And the peace of God, which transcends all understanding, will guard your hearts and your minds in Christ Jesus.”

“I’ve really been able to see that verse at play in my life,” she says. “If I remind myself of that verse or remind myself to be thankful and to be deliberate about doing it, it really helps change my perspective and lets me do what I need to do and do it with a better attitude.”

“God has me here for a reason,” she adds, “and I do believe that He has a plan and that He’s in control; sometimes on bad days that’s all I need to remember to go out there and not be worried or not be anxious or not be a sourpuss.”

Melissa has confidence that she’s where God wants her to be. Her success this season is just part of that confirmation.

“As much as my bobsled journey has been short,” she says, “My athletic journey, to get me into bobsled, has been a long road.”

Melissa was a gifted athlete growing up and continued her athletic career in university, competing as a sprinter with the University of Alberta track and field team in Edmonton. In her second year, she felt burnt out after pushing herself too hard with a heavy course-load and training.

“I had way too much going on,” she says, “I went in super-keen, did spring classes and summer classes between first and second year, so after 20 months of school, I was like, ‘I can’t do this anymore!’”

She was forced to step back and reevaluate and, after a strong finish to her third year, she felt like there was closure to her track career.

“Even though I wasn’t done my degree and I had eligibility left,” she recalls, “it was just this peace and assurance that it was okay, it was time.”

That was when the door opened for bobsleigh. Melissa took the bold step of moving to Calgary to try out for the national team, with no assurance that she would make it.

“I didn’t know if I would make the team or not,” she says, “but I moved down hoping I would. If not, I was going to pack everything back up and head back to school, but I literally brought everything down because I had a peace and assurance that this was the right step for me.”

Thanks to connections she made at Athletes in Action’s National Training Camp, Melissa had a place to live and a supportive community as soon as she moved to Calgary.

“Things just came together,” she recalls, “Being able to have a support group and a network of people that were on my side and said, ‘Yes, you can do this and we’re here for you,’ that was the biggest thing.”

Her quick push times at Canadian trials soon confirmed her feelings of peace and saw her immediately matched up with Canada’s top driver. Now the two are seeing success and looking ahead to the 2018 Winter Olympics in PyeongChang.

“I didn’t really realize until I got into this sport that everything is set up working towards the Olympic games,” she says. “It’s crazy to think that they are less than two years away at this point.”

In addition to the success in the two-woman event, Melissa has been a part of a historic push to add a four-woman event to the world stage.

“You don’t really realize how much you’re part of a movement or changing a sport until you really step back and look at it,” she says excitedly. “Hopefully one day we’re able to have more girls involved in this sport and have more people competing and have it as an Olympic event. The earliest that would possibly be would be in Beijing in 2022.”

Melissa found Christian community through Athletes in Action at university and her experience at National Training Camp helped propel her to the heights of her sport.
Photo Credit : Charlie Booker & Molly Choma