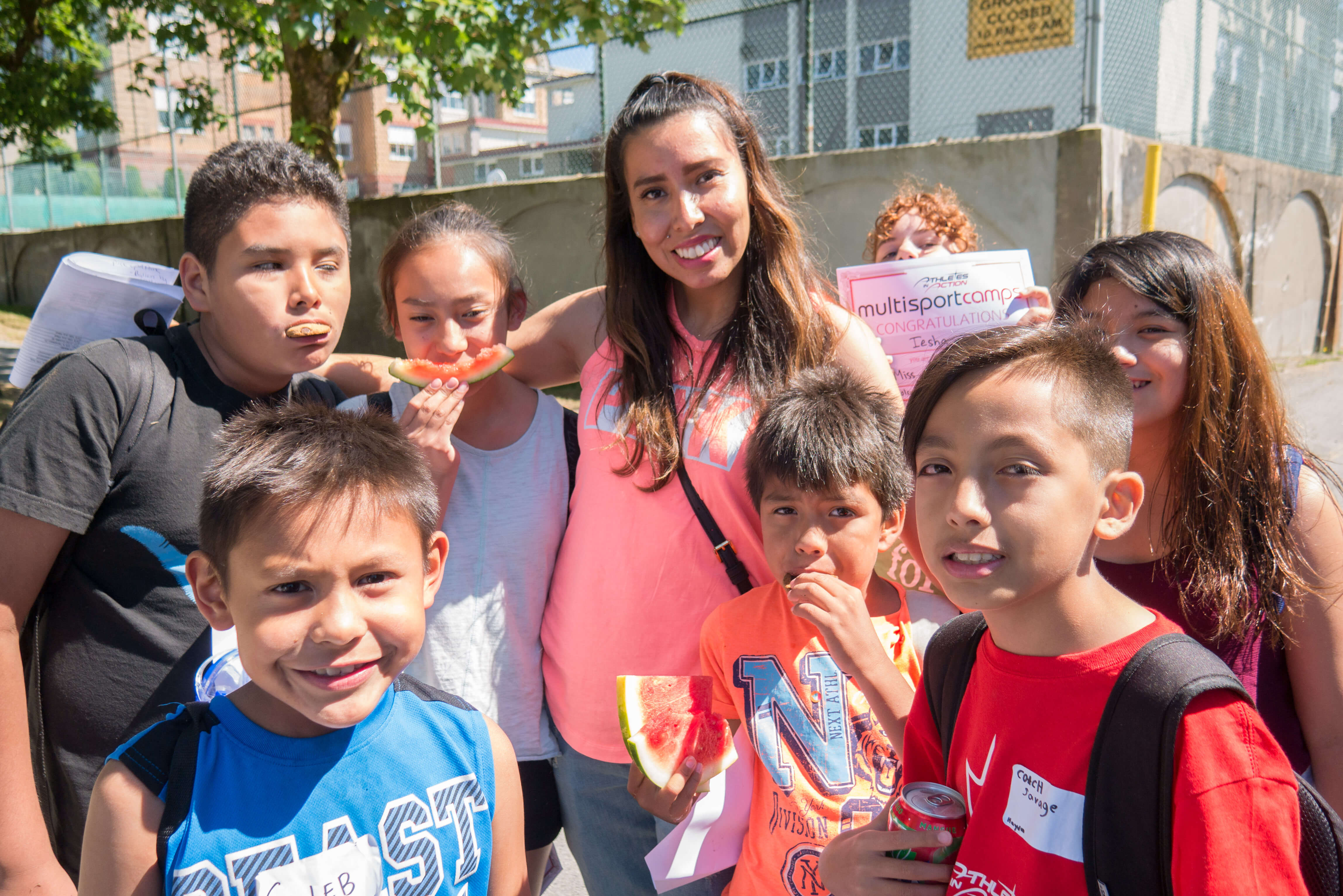 Adversity is an inevitable part of life. But something that I have been learning is that the things we go through and the lessons we learn were never intended to be just for us. When I met Fawnda Bullshields I was reminded of the power in our stories and the way that God can use our experiences to speak into the lives of others.

In mid-July, I had the privilege of helping out with an Athletes in Action athletic development camp in partnership with New Beginnings Baptist Church in Vancouver. I was blown away by the way this church was serving the community in practical ways and the way our partnership is helping them to have a lasting impact.

New Beginnings is a multicultural church, predominately made up of First Nations and inner-city people, and is dedicated to serving the community of East Vancouver while focusing on low income families, single parent families, children at risk, those struggling with addictions and the lonely.

Our camp was very much a reflection of that demographic. For many of the children, their relationship with New Beginnings extends beyond a week at camp. They are also involved in an after school tutoring program that the church runs called “Say Yes!”

Say Yes! is a holistic program that runs throughout the school year in which the kids receive a good meal, hands on tutoring, teaching from the Bible, and time for recreation before the church staff drops them off at home.

Fawnda Bullshields, who helps lead the Say Yes! program, is also in charge of coordinating all the camps that the children are involved in throughout the summer.

Fawnda’s relationship with New Beginnings starts when she was a kid. Her friends in the neighbourhood starting getting involved in some of the programs the church was putting on and Fawnda enjoyed tagging along. Her mom was more hesitant to go to church, but when she saw a Native logo on the front awning of the store where the the church met, she felt welcomed and accepted.

For months, Pastor Joe Russel called her relentlessly each week inviting her to come to church.

Fawnda committed her life to God quickly after she had witnessed the transformation that took place in her mom’s life. Her mother had struggled with an alcohol and drug addiction and hadn’t been able to overcome either of them on her own. However, when Jesus came into her life, she did a complete 180 degree turn. The healing was so dramatic that Fawnda knew God had to be real.

Not long after, God completely changed Fawnda’s life as well and she instantly began sharing her faith with her friends. But Fawnda’s young life wasn’t without its own set of challenges. Dyslexia and other learning disabilities made school difficult for her, and at the age of 13 her father had passed away.

Come 8th grade, and on the verge of failing the school year, Fawnda decided to turn things around and pour herself into her homework and academics.

A major turning point was earning her spot on the Honor Roll later that year. ” I realized then that it’s not about being smart” says Fawnda, “and I tell this to all our kids, because they like to say it’s because I’m Native, or it’s because I have ADHD or I have all these disabilities and I say, ‘I did too.’ They’ll come at me with things but they can’t because there’s nothing that I haven’t gone through that they haven’t.”

Fawnda shares the importance of reminding the kids that “it’s not about being smart, it’s about being consistent and persistent.”

As a First Nations woman with a university degree, and is now working at the church giving back to the community, Fawnda has demonstrated that where you start does not have to dictate where you end up.

Through the Say Yes! program and the other outreach initiatives by New Beginnings, the staff have already seen a glimpse of the impact they are making. The kids are becoming more confident in themselves as they learn how to read, and families are being empowered as the parents learn life skills. Fawnda dreams of raising up these children to be leaders and to give back to their community. She hopes to one day see Native Christian men leading their families well, being strong examples in their community and serving on the church board.

Although one week of an athletic development camp in the summer is short in the grand scheme of things, it does offer a nice change of pace for the kids involved at New Beginnings.

“They love the day camp because it’s fun and mostly relational” says Fawnda. “Our kids especially love it when male leaders come out because they don’t have that role model at all. They see men as scary, abusive, and mean, but any men here are so sweet and you know that they have God in them. They can see that difference. They really want their love and they look up to them so much!”

Our week of camp ends up being way more than having fun and learning athletic skills. The summer camp coaches get to be role models for kids who often don’t have them, give them hope and speak into their future, and show them what it means to love and to be loved by God.

This summer Athletes in Action is partnering with 76 churches across Canada to run camps much like this one. We believe that the local church is the hope of the world, and it is a joy and a privilege for us to partner with churches like New Beginnings who are bringing hope to communities all across Canada.