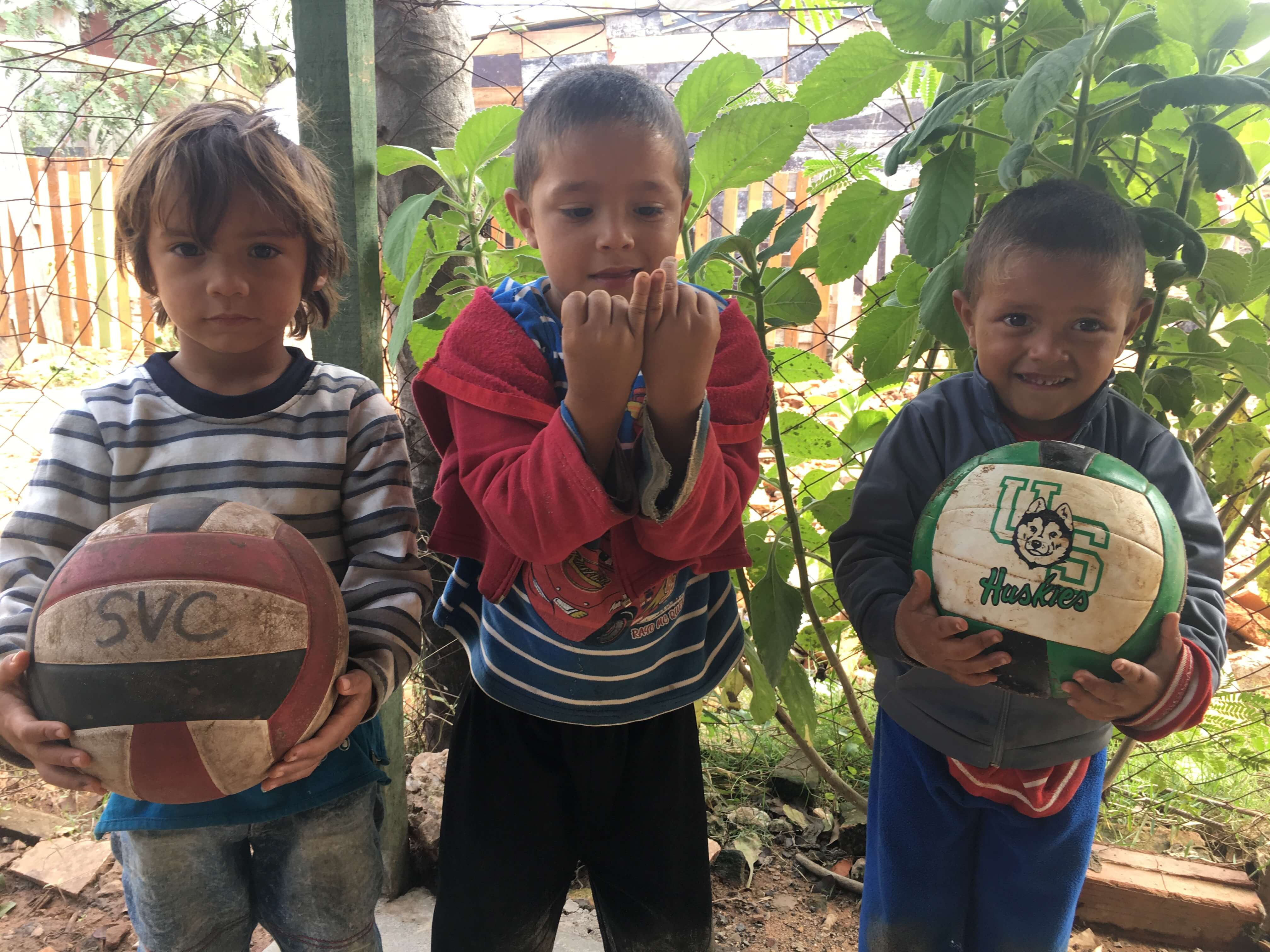 In a small church building in Paraguay with white walls, white tile floors, and white plastic chairs, a couple dozen people are gathered together. Most of them are clustered around a man named Caesar, who is sitting in a chair at the front of the church. For four years, he’s been completely blind.

About half of the people in the room are not from Paraguay: they’re Canadians, on a trip with Athletes in Action Volleyball. They did not expect to be fervently praying for a blind man to receive his sight when they came to visit this small church. All they intended was for two of their team to share their testimonies and tell the church why they had traveled over 10,000 kilometers to visit them.

AIA Volleyball was invited to Paraguay to partner with SportAid, a charity that uses sports to further humanitarian causes. SportAid has been working in Paraguay with an organization called Jesus Responde to build nutrition stations throughout the country to help serve the needs of local communities.

These nutrition stations provide food, education, and sports camps for children, with SportAid training the volunteers from local partner churches how to run these camps and coach kids. The group has focussed on soccer, Paraguay’s most popular sport, but SportAid wanted to see if other sports could reach even more people.

“They asked their contact in Paraguay if there was another sport that could be beneficial and right away he said volleyball,” says Jason Warkentin from AIA Volleyball, who helped lead the trip.

The team of six AIA staff and five university athletes went in with two main goals: help with a work project to build a new nutrition station and conduct a coaching clinic to train facilitators to run volleyball camps for kids. If they got the chance to play volleyball and build some relationships along the way, all the better.

One of the AIA staff had no volleyball background: campus staff Shawn Hermanson. He came along to play a spiritual mentorship role, helping with devotional times and pouring into the lives of the student athletes on the trip. His background in construction proved useful too when it came to the work site for the nutrition station

“We had no idea what to expect,” says Jason. “The area that we were working is basically on a lake, but over time there’s been an accumulation of sand, dirt, and garbage that has stretched out for about half a kilometre at least. As it’s stretched out, people have started building their homes on there.”

On the bus to and from the site, Jason and Shawn shared with each other what they were reading in the Bible. They happened to both be reading through the book of Acts while in Paraguay.

“I had really been wrestling with God,” recalls Shawn. “When are we going to see the power that we were promised through the Holy Spirit and read about in the book of Acts?”

As Shawn read the story of Peter and John healing a lame beggar in Acts chapter 3, the thought came into his head: “Lord, are you going to have me encounter and pray for a blind man while I’m in Paraguay?”

“It was such a bizarre thought, because it didn’t even fit the story I read,” laughs Shawn. Asking God for clarity, Isaiah 42 came to mind. Not remembering what that chapter was about, he flipped open his Bible and came to verse 7, which speaks prophetically about Jesus coming “to open the eyes that are blind.”

“I thought that was pretty specific, but I didn’t know what to do with it,” says Shawn, “When we got to the church service on Saturday evening, I turned to Jason to tell him about the strong feeling I had that God would have me pray for a blind man while I’m in Paraguay.”

Before the words could come out of his mouth, the pastor of the church walked through the door escorting a blind man: Caesar, a guitar-playing grandfather who had been robbed of his sight by diabetes.

Shawn told Jason what God had placed on his heart and together they shared with the pastor, who began to cry and insisted that all other plans for the service be put on hold so they could pray for Caesar.

“I was scared,” admits Shawn. “I wanted to make sure I heard from the Lord and wasn’t stepping out in my own strength or pride.”

“We were anxious about it,” says Jason. “What happens if nothing happens?”

“I was worried that I made this up,” says Shawn, “or that I was going to do something wrong or that my lack of faith was going to be what kept him from being healed. All those doubts were rolling through my head. Even just wording: I don’t know what to pray or do! I had to just trust that the Lord was going to lead everything.”

Shawn and Jason stepped up to the front of the church, asked Caesar if he wanted to receive his sight and believed that Jesus had the power to heal him. He said, “Yes I do.”

The pastor and elders of the church came up and surrounded Caesar as Shawn put his hands over Caesar’s eyes and prayed a simple prayer: “In the name of Jesus of Nazareth, receive your sight.”

There’s an assumption that miraculous healing is instantaneous, but that isn’t always the case, even in scripture. When Jesus heals a blind man in the gospel of Mark, chapter 8, the man does not immediately receive full vision after Jesus first lays his hands on him. Instead, he sees the people as indistinct figures — “They look like trees,” he says — and Jesus lays hands on him a second time to heal him completely.

For the AIA team and Caesar, it was a similar story. “Over the course of the next three and a half hours of praying,” says Shawn, “each time we prayed and removed our hands, he could see a little more clearly.”

The first time, he could just see shadows; then the shadows became indistinct shapes; gradually, the shapes became people. And then one time when the hands were removed from Caesar’s eyes, he said, “There’s my wife.”

Throughout the three-and-a-half hours, there were times of quiet reflection, listening for the Holy Spirit. At other times, people sang songs. At one point, even his four-year-old grandson prayed for him. Shawn and Jason felt that one of the reasons it took so much time was so that no one individual could claim ownership of the miracle.

“It involved the whole body,” says Shawn. “The entire church was involved, all of our team was involved. It was just a wonderful evening, we saw the Holy Spirit at work and felt His presence so strongly.”

“God used everybody and everybody’s gifts worked together,” says Jason. “Shawn had the prophecy that this was going to happen and he spoke the words, but everybody had a role to play.”

“There was a time when I felt strongly that Mitch, one of our students, should pray for him,” says Shawn. “I asked him and he just started weeping and dropped to his knees and put his fists in the air and said, ‘Jesus, I had doubts before I came on this tour, but I believe in you, I believe in you, I believe.’ He was just proclaiming his faith with joy and tears and then he prayed a beautiful prayer for Caesar for his healing.”

By the end of the evening, Caesar did not receive full 20/20 vision, but was able to read large print and, in his joy, led everyone in worship.

“I’m not sure why it stopped incomplete,” says Shawn, “but there came a point where it just felt like it was over and that God had done what he intended to do. He was so joyful and the church was rejoicing and Caesar led us in praise and worship after that for about 15-20 minutes. He was playing his guitar and just singing at the top of his lungs. It was a beautiful worship time.”

The experience of witnessing a miracle has had a profound impact on every member of the team. It’s a powerful story that is hard to dismiss.

“I can tell the story with full boldness because people can’t argue with me,” says Shawn. “I was there. Everyone on our team witnessed it and no one can ever take that away from us. People either have to ignore it, accept it, or think we’re lying about it.”

“There was a blind man who walked in,” says Jason, “and when he walked out he could see.”

The experience has also challenged Shawn to be more open to God’s leading while back in Canada, where it can become easy to lose sight of opportunities to see God at work.

“We go on a trip and suddenly we become super-Christians,” he says, “because we’re more deliberate about it. It challenges me to be more mission-minded and more spirit-filled and seeking to be available to God every day, wherever I am.”

“I don’t feel like I have the gift of healing,” he adds, “but God chose that moment: he chose to use us all. I just want to be more open to praying ‘God, give us opportunities, help us to hear your voice and be obedient.’ I think usually obedience is scary and we need to press through fear.”

Each of the people who went on the trip to Paraguay with AIA Volleyball, staff and student-athletes alike, now have a tangible example of what God can do when we push past fear to be obedient. A man once was blind and now can see.