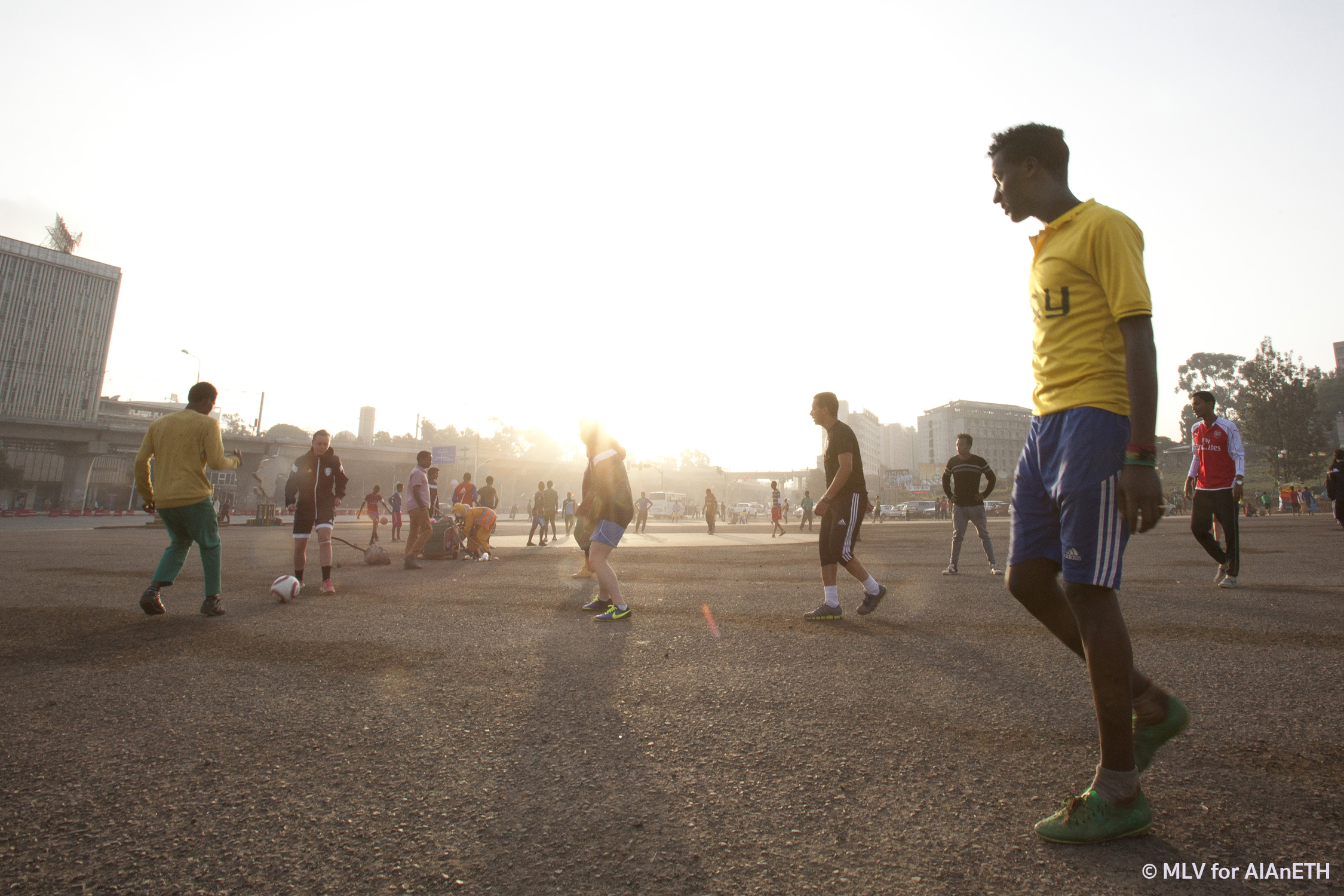 What if you could use your passion for sport to help change the world?

That is the question Athletes in Action has been posing to soccer players throughout Canada, encouraging them to see how sports can make an impact off the field. Some of those players will be joining Athletes in Action staff as they travel to Ethiopia to serve the local soccer community.

This will be the third summer that AIA has sent teams to Ethiopia, where they have run camps for kids, mentored coaches, and played against professional teams, all with the ultimate goal of sharing their faith through sport.

Connecting with professional and university athletes

“The teams that we play against are some of the top clubs in the country,” says Heather Stevenson, who leads international tours for AIA Soccer. “Some of the players would be national team level.”

The friendly matches between AIA Soccer and professional or university teams open up doors and make connections to help introduce high-level players to Athletes in Action, sometimes for the first time. They also provide an opportunity to share their faith, both during the game and after.

“Two of the guys that came with us last year were from the campus ministry,” says Heather. “Rod Alm and Shawn Hermanson are not soccer guys at all, but they just love sharing their faith any chance they can get. Any event that we were at, they would always be talking to people on the sidelines.”

“I remember Shawn had this whole group of guys around him,” she says. “We were just playing street soccer and he’s sharing stories about how his faith has impacted his life. Then we had to go, but Shawn was like, ‘We’re not done talking!’ So he’s taking down phone numbers and names and setting up appointments for these guys to come hear more about Jesus.”

After games, someone from the team will share their story with their opposition and fans, which sometimes has unexpected results.

“One team in particular — we didn’t prompt them to do this at all — but their captain and another girl stood up and said, ‘You guys all clearly love each other a lot and you can tell by the way that you play on the field. You can tell there’s something different about you.”

“Our whole team was incredibly touched,” says Heather. “Obviously what they’re seeing is Jesus in us, because these girls had only known each other for a few days.”

The main goal of this trip to Ethiopia is to support local ministries and help them grow. To that end, AIA has partnered with two local people: Tsegaye, the head of AIA in Ethiopia, and Yohannes, who has a close connection with the local soccer community.

“Yohannes works with another organization,” explains Heather, “but he loves using sport to communicate the gospel. He does a lot of work with kids who are underprivileged, kids who live on the street and have nothing.”

This summer, AIA will be running camps with some of the Yohannes’ kids that Yohannes works with during the 17-day tour. Last year, they were able to host the soccer camp for these kids at Bingham Academy, a Christian school in Addis Ababa, whose grass field was a blessing.

“Nice fields are really hard to come by in Ethiopia,” says Heather, “and all the kids who were coming, normally they’d just play on the street, so they were so excited to be on that field.”

AIA will also be running camps in partnership with local churches to serve their community, as well as a camp for a team of hearing impaired girls. That team is coached by Yohannes’s head volunteer, Workenehe.

“People who have disabilities are very looked down upon in Ethiopia,” says Heather. “They don’t have opportunities or resources available to them, so it’s a big deal that they’re able to play on this team.”

Heather said the team is excited to play with those girls and run a camp, even if she’s unsure how exactly it will work.

Through Yohannes, the team also has an opportunity to connect with the Ethiopian Football Federation, who have endorsed AIA’s Coaching 4 Life program.

“On AIA’s very first trip in 2015, they did a Coaching 4 Life conference,” says Heather, “and the federation had some representatives there. From there, they said, ‘This is incredible material, we love what you’re teaching, and we want all of our coaches in Ethiopia to go through this.’

“Coaches have an incredible platform for impacting their players,” she adds, “but a lot of people don’t understand how to leverage that influence in a positive way. Christians and non-Christians both want to come to something like this, because they want to be an effective coach.”

The federation recognized the program with a certificate and encouraged Yohannes to take Coaching 4 Life to other provinces throughout Ethiopia. AIA worked to equip Yohannes to continue running the conferences throughout the year in between their trips.

“That’s what we want,” says Heather. “We want the local people, who are there year-round, to feel empowered to do ministry and to have the training and resources they need.”

While it’s rewarding to see how the local ministries have benefited from AIA’s previous trips to Ethiopia, the tours also significantly impact the students on the team.

“We want these trips not just to be a two-week experience, but we want them to understand what it means for them to make a positive impact wherever they are, whether it’s on their campus, or on their team, or in their community, or in the workforce,” says Heather.

“This year two of the girls who came on our trip last year are coming back,” she adds. “One of them is now going to be doing an internship with AIA and the other still has a year of school left, but she’s considering working with AIA too.

“The trips really do serve as a catalyst towards future ministry.”