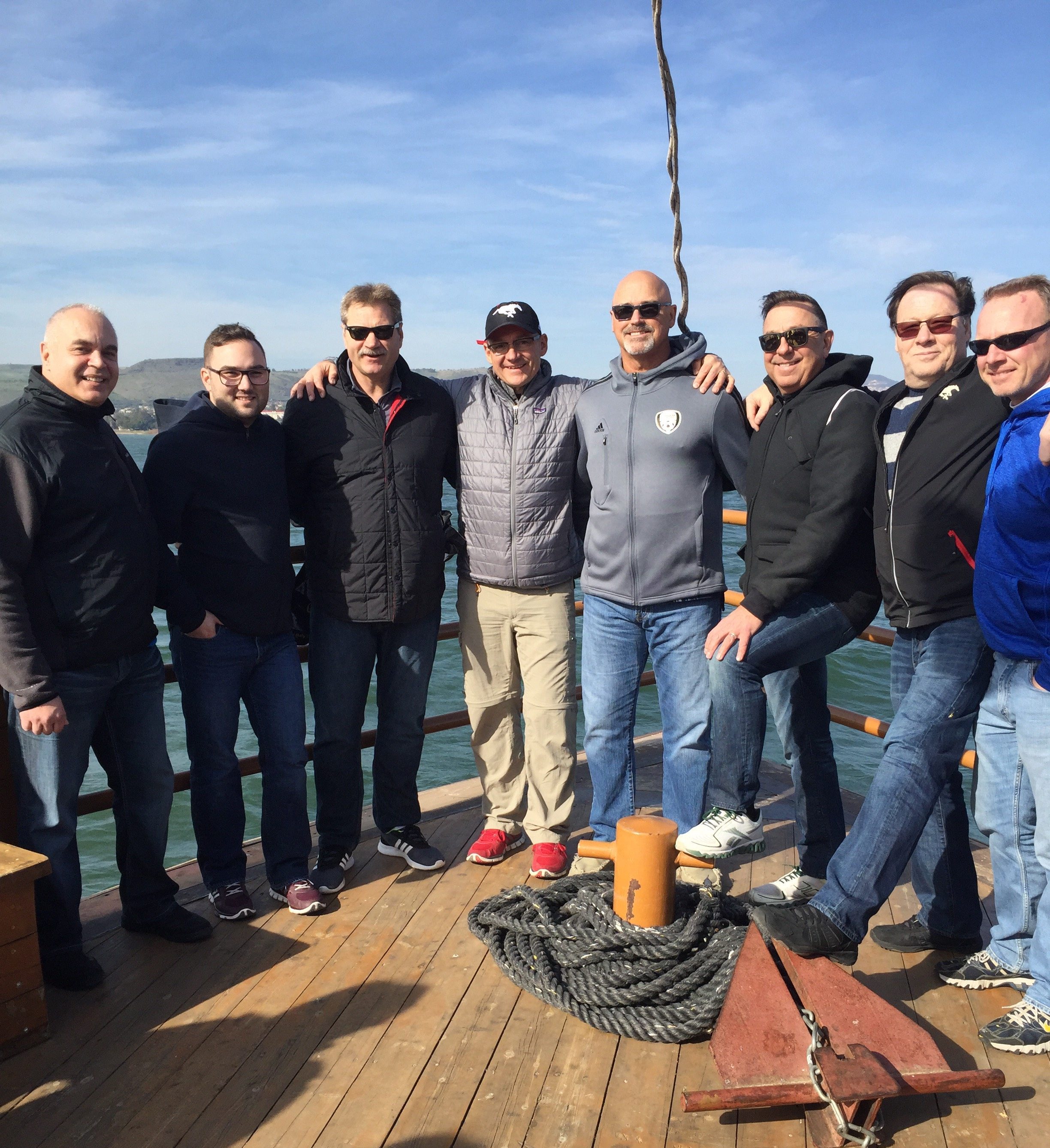 In early February, a group of Athletes in Action chaplains, members of their families, and two players from the CFL, traveled to Israel to tour symbolic Christian and Jewish sites. It was an opportunity to bring stories from the Bible to life in a unique way and it had a powerful impact on everyone who went.

Rodd Sawatzky, the chaplain for the Calgary Stampeders, was excited to go. “I wanted to walk where Jesus walked,” he said. “It was even better than I hoped. Every square foot has history.”

It also gave him a new insight into the life and teachings of Jesus. He gave an example: “Seeing the terrain, when Jesus was speaking and saying, ‘The rocks will cry out,’ I’ve never seen such a rocky place in my whole life.”

Georgie Kearns, who disciples wives and other women connected to Toronto-area sports teams, initially had some hesitations about going. “My imagination is so vivid, maybe I was afraid I would be disappointed,” she says, “but for whatever reason it wasn’t on my bucket list.”

It more than lived up to her imagination. “All the places came alive!” she says. “Just the amount of knowledge you gain was amazing.”

The trip started in Tel Aviv, then went to Tiberias on the shores of the Sea of Galilee. From there, they travelled along the Jordan River down to the Dead Sea and then Jerusalem.

“The route we took was almost like a great big question mark,” said Kearns.

Sawatzky got the chance to bring along two players from the CFL, Jamar Wall and Zach Minter. “These guys have been two of my key leaders with the Calgary Stampeders,” he said.

“I grew up in the church,” said Wall, “and I just felt like this was a once-in-a-lifetime trip to actually get to see firsthand all these places that I was reading about.”

“I see it, I get it, now I can put it into perspective when I’m reading my Bible,” he added. “Just at church for me on Sunday the other day, our pastor was talking about the sermon on the mount and I was like, hey, I was there.”

The group got to take a boat out onto the Sea of Galilee, which seemed to impact the entire group.

“It struck everyone that this was the same Sea of Galilee that Jesus walked on,” said Sawatzky. When we were out there, it was super rough. We were in a big tourist boat, but you try to imagine yourself in a small fishing boat.”

“The day we went it was windy and the waves seemed like a couple feet tall,” he recalls. “We were rocking, so when you look at Jesus calming the waters and how much worse the storm must have been at the time, it made me realize how much power there was behind his words.”

“Being on the boat on the Sea of Galilee was a really touching moment,” said Wall. “We had some Christian music playing and people were singing. I had some different things personally going on and it all hit home right then. It was all just an amazing experience.”

Kearns was glad that the wind picked up. “The guide told us that when they take tourists out on the water, it’s generally very beautiful, but when the water got choppy it was even better. It reminded you of why the disciples were scared, but Jesus was saying, ‘I am with you. I’ve got this.’”

Each person on the trip found different unique moments that stood out to them, from travelling down the 2500-year-old Hezekiah’s Tunnels, to floating on the Dead Sea, or taking communion in the Garden of Gethsemane.

“One moment I’ll never forget,” said Kearns, “was near the King David Hotel in Jerusalem. When you walk through Mamilla Mall, you go up a flight of steps, and it was the first time I saw the wall of Jerusalem. The wall is made of Jerusalem stone and the way it was lit, it made me think of heaven. This is exactly how I imagined the New Jerusalem, with that gleaming white wall. From that angle it looked so pure and so perfect.”

The group also got a chance to see how sport is used in Israel to bridge gaps and bring people together. No matter what walk of life you’re from, sports can be a common denominator that cuts across cultural boundaries.

“We visited the Canada Centre where they have a hockey program that brings together Christian, Muslim, and Jewish kids,” said Nolan, who particularly connected with that stop on the tour as a hockey player and chaplain.

There was also a tennis academy in the north near the Lebanese border. They met with the instructor in a bomb shelter where he told them about the tennis ministry he has with the kids in the area. “He didn’t want to leave the kids in the area with nothing to do,” said Kearns.

“It took us from a tourism type of trip,” she added, “into a personal trip, where you really get to meet the local people.”

“We went to a soccer complex,” said Wall, “that was close enough to the Lebanese border that they had a bunker in case a missile was fired and they had to run to it. It humbles you.”

At the soccer academy, the group got a chance to meet and play soccer with the kids in the program.

“I honestly wish we could have done more with the kids,” said Wall. “Even though they didn’t know much about us, if you say you’re a professional athlete, their eyes light up just like anywhere else.”

“I have a little one,” he added, “so where I’m at now, I sympathise with these kids. Sports is their outlet, I really want to do something more, to go back there and really spend time with those kids.”

Wall admitted that the trip opened his eyes to realities that he was completely unaware of prior to going. Now he’s eager to find ways to get more professional athletes to go to Israel and connect with and help kids through sports. “Zach and I were talking about it throughout the trip. We’re just seeing if we can get other guys on board.”

The rest of the group is also eager to return.

“I wouldn’t hesitate to go again and bring other people,” said Sawatzky. “You can say with confidence, you feel safe and it’s a great investment.”

Kearns put it simply: “Every single day was worthwhile.”