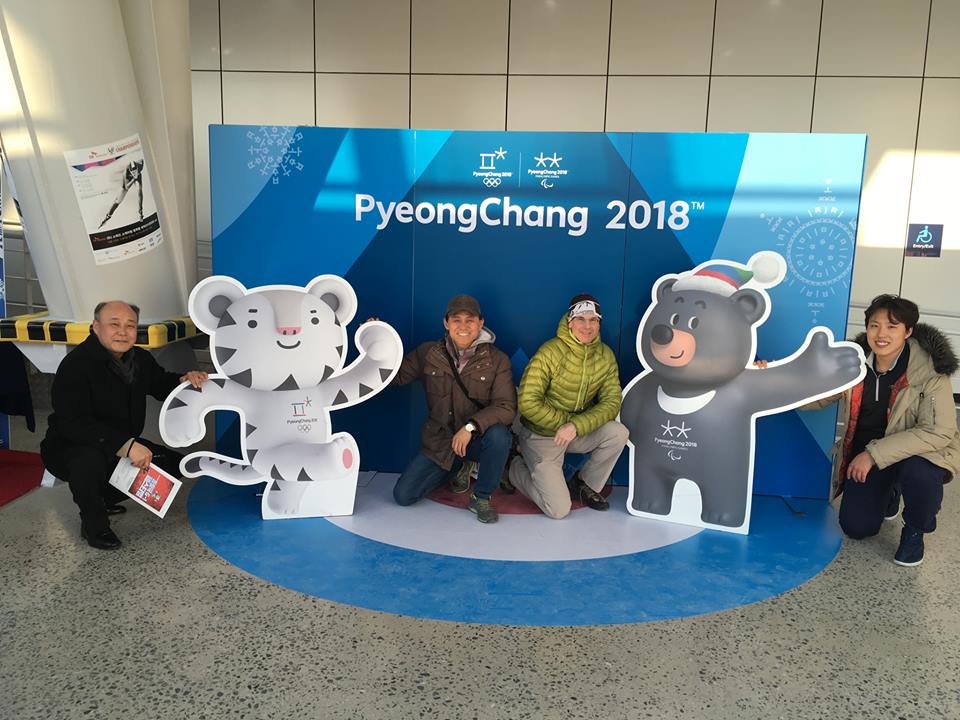 With preparation for the 2018 Winter Olympics in full swing, Athletes in Action chaplain Steve Sellers made his way over to South Korea. Sellers set out to discuss chaplaincy in the Olympic Village with the Korean Olympic Organizing Committee and to minister to the speed skaters and luge athletes who were competing in the World Championship and World Cup events.

Sellers did his first Olympic chaplaincy in 1998 at the Winter Olympics in Nagano, Japan. According to Sellers, the Olympic Committee in Japan did not know what the multifaith centre in the Olympic Village was or how to run it. So, when Athletes in Action stepped in and offered to help, the Committee gratefully accepted their offer. That year, the religious centre was placed between the food hall and the dorms where many people passed through and stopped in for chapels.

“There was so much traffic with Bible studies every night,” stated Sellers. “We had international chaplains in there…We didn’t make it happen. God made it happen.”

Big things continued to take place with Sellers being in South Korea in early February, meeting with the Organizing Committee regarding the religious centre and chaplaincy programs for the upcoming games.

“As it turns out, it was really important that I went over there because the day I went over, all I had was an address…The venues are totally completed, everything’s ready to go except the religious centre,” Sellers said. “There are things that happened that morning that were totally engineered by God. He just guided it the whole way. Every step.”

Sellers shared that at the same time he was arriving at the given address, two men were walking out of the building. Sellers introduced himself and inquired about speaking with someone in regards to the religious centre. One of the men quickly got on the phone, and 20 minutes later offered to take Sellers over to where the religious centre was being built to meet with the person in charge.

As Sellers stated, “The guy who showed up was in charge of the entire Olympic Village and Athlete Services. He came with a translator. We sat down for about an hour, and basically his plan was to have some of the local pastors be on call in case the athletes needed someone to talk to. And I was like, ‘Well, that’s not exactly how it works.’”

For the next hour, Sellers explained how the host Olympic Committees usually get the International Sports Coalition to bring in experienced sport chaplains to run the religious centre in the Olympic Village. Sellers also got the opportunity to connect with some of the local pastors to explain what chaplaincy at the Olympics looks like.

“In that culture, it’s very hierarchical, and the pastors have a lot of authority,” stated Sellers.

Typically, Athletes in Action cannot get the religious centre open until they go through the local pastors.

“So, we needed to check in with them,” Sellers said. “I was able to connect the local pastors with the people who will be running the Olympic Villages.”

In his conversations with the local pastors, Sellers explained what they can do for outreach during the Olympics. He connected these local pastors with the International Sports Coalition so they could begin planning the religious centre chaplaincy program.

“I was able to be the catalyst for a lot of connections,” stated Sellers. “That was the most successful part of my trip. And then also just meeting with the local church.”

During his time in South Korea, Sellers got the opportunity to meet with and become good friends with the Korean Campus Crusade for Christ (KCCC), a sister organization of Power to Change Ministries. KCCC eagerly offered to serve in whatever capacity they could.

According to Sellers, one person offered up their neighbouring coffee house for the chaplains to use. On weekends, this coffee house is used for a church, but they offered to close down the coffee shop for two weeks during the Olympics to provide chaplains with a space for outreach and discipleship. “The Koreans are just wonderful people,” said Sellers. So, it was good to make those connections as well.”

In Sellers’ 9 days in South Korea, God was at work in helping him start off the chaplaincy program and connecting him to some of the World Championship and World Cup athletes who were there competing.

“In the short time that I was there, the World’s Single Distance Speed Skating Championship was going on, so I was able to have Bible study with a few guys…they’ve been on the road for weeks and weeks, and they were just feeling drained,” Sellers stated.

“It was amazing how receptive they were for some spiritual input and some scholarship. There was some really great ministry there.”

The luge World Cup also took place during Sellers’ stay in South Korea, so he got to meet with and encourage one of the Christian athletes on the Canadian luge team.

For now, Sellers is trusting and praying that God will specially select and provide the right international chaplains for the religious centre. And with that, his time in South Korea was a wrap, until he returns for the PyeongChang 2018 Olympic Winter Games.