Olympic gold medallist knows that she is enough in Christ 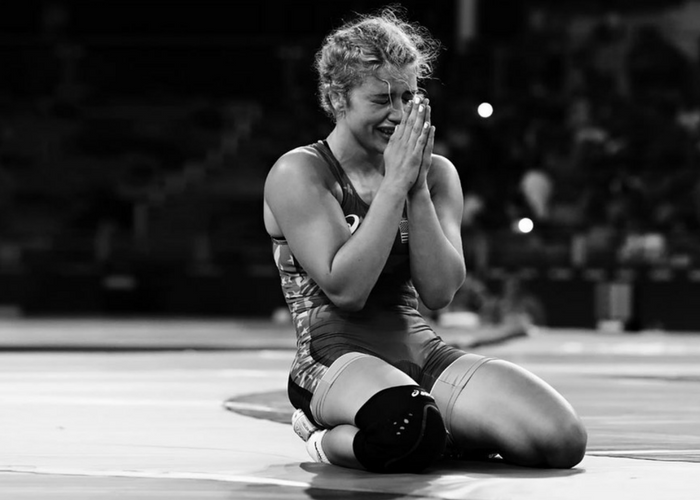 Being a chaplain at the Olympic Games is “like attending ten funerals and one wedding every day,” according to Dr. Ashley Null, former chair of the Major Event Chaplaincy Commission. It’s a quote that Jarret Wall took to heart as he was blessed with the opportunity to serve as a chaplain in the Athlete’s Village during the 2016 Summer Olympics in Rio.

“Almost everybody leaves devastated,” he says. “That’s where we have to be there for people, with the families and with the athletes themselves, to provide emotional and spiritual care.”

It is emotionally and spiritually jarring for an athlete to fall short of achieving their dreams, particularly at the Olympics, which only come around every four years. For Wall, that meant supporting many athletes at their lowest point: physically and mentally exhausted, questioning their identity and wondering what the future holds.

Athletes in Action Canada has made connections and built relationships with athletes in multiple Olympic sports over the past year. “We have a ministry presence in upwards of 10 sports,” says Wall. “The one that I’m primarily involved with is our wrestling program, but there is also rugby, some athletes that are swimmers, field hockey, and volleyball.”

Each of those athletes has needed support and reassurance of God’s grace at different stages in their athletic journey, from sprinter Philip Osei, whose injury-riddled season prevented him from going to the Olympics at all, to boxer Mandy Bujold, who was a medal hopeful, but was hospitalized with a stomach ailment just before her quarterfinal match, leaving her dehydrated, sapped of energy and utterly unable to defeat her opponent.

Aside from providing essential support to athletes at their lowest, Wall and other chaplains were also able to celebrate with athletes who reached the pinnacle of their sport.

“There were so many amazing, amazing things that happened,” says Wall, “but the highlight was simply to receive a thank you card.”

The card was from Helen Maroulis, an American wrestler. With women’s wrestling not supported by the NCAA, Maroulis came to Canada to continue her wrestling career, competing for Simon Fraser University. That’s where she connected with Wall and AIA Canada.

“Helen arrived at SFU as a person who was newer in her faith,” says Wall. “My wife and I would take her to church and she got involved with our new Athletes in Action ministry at SFU and eventually became a student leader.”

When Maroulis made the gold medal final in her weight class, Wall knew that he had to be there. She was facing one of the legends of the sport: Japan’s Saori Yoshida, a 16-time world champion and three-time reigning Olympic champion. Yoshida had lost just two matches in the last 14 years and is the most decorated freestyle wrestler ever. Heading into the gold medal match, Yoshida had yet to give up a single point to her opponents.

Maroulis opened up about her fear and anxiety in Sports Illustrated after the Olympics and that worry was evident heading into the match. Despite ample preparation (Wall: “She’s been studying this match for over two years”) she still couldn’t help wondering if she’d done enough.

“There’s this line that she repeats to herself,” says Wall, “and it has to do with her identity: ‘Christ is in me, I am enough.’” It’s a principle that she learned to steady her nerves as she walked to the mat.

“She was losing 1-0 at half-time,” says Wall, “But she pulled it together, waited patiently, and in the final minute scored the points she needed to win the gold medal.”

Wall met with Maroulis shortly after her win. “She basically had 36 hours of straight media and didn’t sleep,” he says, “but I could finally meet with her in the safety of the athlete’s village for a couple of hours and just help her debrief and process and pray with her.” That’s when Maroulis provided a thank you card. Somehow, in the midst of all the craziness that surrounded her gold medal win, she found the time to write a thank you card.

“It was really special to know that she appreciates what we’ve done and the way we’ve been involved in her life,” says Wall. “Even though she had no time for anything else, she took the time to write this personalized card.”