Despite missing the Olympics, Philip Osei keeps the faith 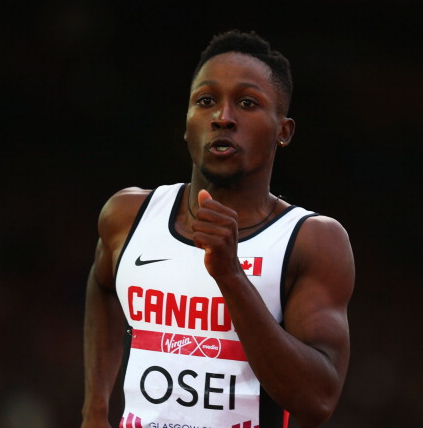 Like many of you, Philip Osei spent the last couple weeks watching the Rio Olympics, cheering on Team Canada. Unlike you, Osei was not meant to just be watching the Games; he was meant to be there, competing in the 400 meter dash.

He watched Wayde van Niekerk crush Michael Johnson’s 400 meter record from the comfort of home, but if all had gone just right for Osei over the last year, he might have been running in that final with van Niekerk. Instead, everything went wrong.

“It hurts watching from home knowing I should be there,” Osei says, “but God doesn’t make mistakes. If I was meant to be there, I’d be there representing my country.”

For a year, Osei was certain he was going to the Olympics, but a series of injuries and setbacks scuttled his dream. Through it all, however, he kept his faith in God’s timing.

Osei laid the groundwork for going to the Games when he ran a personal best at the 2015 NACAC championships in San Jose, Costa Rica. His time of 45.23 seconds wasn’t just the best time he had every run; it met the Olympic qualifying standard of 45.40.

“I came into this season with confidence,” he says, “knowing that I just had to come top three [at national trials]. I was the national champion last year, so I thought, ‘This is going to be pretty smooth going into Rio.’”

His confidence was met with success during the indoor season, as Osei ran personal bests in both the 400 meters and 60 meters. The personal best in the 60 meters was a particular encouragement, as he was working on his speed in training in order to get his time below 45 seconds once the outdoor season began.

His confidence was met with success during the indoor season, as Osei ran personal bests in both the 400 meters and 60 meters. The personal best in the 60 meters was a particular encouragement, as he was working on his speed in training in order to get his time below 45 seconds once the outdoor season began.

It was during one of those workouts, however, that the problems began.

“I remember it was a speed endurance workout,” he says, “and I tore my hamstring. But it didn’t bother me to the extent that I thought, ‘Oh, my season’s over.’ I just started the rehab and three weeks later I was able to sprint in spikes again.”

But after a track meet in Florida, another injury reared its head. With national trials just over a month away, Osei found himself unable to train properly.

“I’m struggling to finish a workout,” he recalls, “because my right side of my body—my hip—kept locking up. I couldn’t get full range in my stride. It got to a point where I wasn’t recovering.”

An MRI found that Osei had a torn labrum in his right hip. That left him with three options: keep running with the torn labrum and hope the problem went away on its own; surgery, which likely meant the end of his season and his Olympic dream; or an anti-inflammatory injection to deal with the swelling and pain to hopefully speed his recovery.

After the shot, Osei rested, then slowly began working out and training. The confidence from the beginning of the year began creeping back as his training ramped up. He headed to Vancouver to participate in the Harry Jerome International Track Classic, just to get a race in before the national trials.

“I had the most amazing warm-up ever,” he says. “I felt like I was back to where I was indoors and then I get into my blocks, the gun goes, and 20 metres into the race, I feel my hamstring again. I’m forced to stop, not finish the race.”

National trials were just three weeks away. With his faith in his body slipping away, Osei could only rely on his faith in God.

Finally, three days before national trials in Edmonton, Osei was able to sprint again. But instead of the confidence that he had at the start of the season, he was filled with trepidation, afraid that his body might betray him again. In his semi-final heat, he got out of the blocks slowly, waiting to see how his hamstring would respond.

As he came out of the first curve of the track, Osei realized he was far behind. “Wow, what am I doing?” he recalls thinking as he saw the rest of the field pulling away from him. With that, he shut down all his concerns and just ran, barely making the final in the eighth and final spot.

When the time for the final came, Osei could only trust in God. He remembers thinking, “I didn’t go through this for no reason. God, you’re trying to tell me something, that you’re going to be glorified right now.”

“I honestly do not remember the race,” he says. “My mind was off, I just ran. And then I finished third with a season-best of 46:41, which is better than what I expected, to be honest. I was in no shape to do anything like that.”

To Osei, that top-three finish meant one thing: “Wow, I’m going to the Olympics.”

But when Team Canada was announced, Osei was surprised to find that he wasn’t on the team. His Olympic qualifying time from a year earlier was in San Jose, Costa Rica, which sits at an elevation of 1,172 meters. The thinner air at higher elevations tends to lead to faster times in sprint events, with races at altitudes above 1,000 meters noted as altitude-assisted by the International Association of Athletics Federations.

The difference in the 400 meters is likely a little more than a tenth of a second, meaning Osei’s 45.23 would have still reached Olympic qualifying standard at a lower altitude. But that question mark combined with his injuries and resulting slower times gave Athletics Canada enough reason to leave him off the team.

The decision stunned Osei; just when he thought that he had made it and could focus on getting prepared for the Olympics, the rug was pulled out from under his feet. With one more event left in his season, Osei wrote an appeal to Athletics Canada, pleading his case for proving his fitness.

The final race came just one week after national trials.

“I ended up running the fastest time in the country, which was 45:86,” he says, a time that was just off the Olympic qualifying standard and would have placed him 27th among the 53 athletes who ran in the qualifying round of the 400 meters in Rio.

“What’s crazy is that I was actually disappointed in the time,” he says. “I wanted to run a personal best, despite everything that happened.”

The time evidently wasn’t enough to convince Athletics Canada, as they chose to leave Osei off the team and not send an athlete to compete in the men’s 400 meters. It’s a decision that wasn’t easy to take, but Osei is handling it well thanks to his faith and the help of spiritual mentors like Herbie Kuhn, the Athletes in Action chaplain who has been working with several Canadian sprinters.

“If I didn’t believe and I didn’t have a person like Herbie to come in and remind me of faith, remind me of the word, I honestly do feel like I would have been depressed.”

Osei also received encouragement from the new world record holder in the 400 meters, Wayde van Niekerk, a Christian who thanked God in interviews after winning in Rio and showed the camera what he wrote on his spikes: “Jesus I’m all yours use me.”

“It’s great to see a believer do something like that and then give Jesus all the glory,” Osei says. “Wayde is a really humble dude. He gave me words of encouragement a couple months ago when I was dealing with injuries that really helped mentally and kept me focused.”

Osei believes that he has come out of this ordeal stronger, not just as an athlete, but as a Christian.

“The reason why I feel good after all that,” he says, “is because I still have my faith. It shows that my faith is real, it’s not just because I wanted something from God. You don’t just have faith because you want something.”

“And next year’s going to be world championships, so that’s my next goal,” he adds. “I really feel like all I need is health, and I feel like I have that now. I definitely believe I can finish top-8 in the world.”