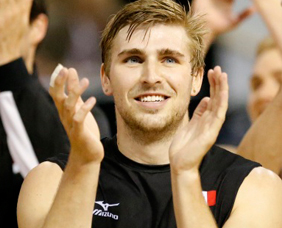 Canada barely qualified for the Olympics in men’s volleyball, sneaking in with a five-set win over China in the Olympic Qualification tournament in June. It’s the first Olympic appearance in men’s indoor volleyball for Canada in 24 years, but the team is clearly not satisfied with just being there.

The 12th-ranked Canada ended up in the “Group of Death” with a slew of top-ranked opponents, but weren’t fazed, stunning Team USA in straight sets to open the tournament, then finishing off the preliminary round with an upset over 4th-ranked Italy to secure their place in the quarterfinals.

They didn’t just survive the Group of Death; they finished second behind only the top-ranked hosts, Brazil.

Rudy Verhoeff has played a minor role so far for Canada, but he knows that his identity and value are not defined by what he does on the court. He spoke about that when Athletes in Action had a chance to talk to him before he flew to Rio for the Olympics.

One portion of this interview could have even been talking about his Olympics so far.

“This past tournament, I wasn’t actually on the court a whole lot, but with volleyball, it’s such a team sport that no matter what role you’re in, you’re making an impact. I’ve been in experiences with the national team where I was the guy and I came up with huge plays and I’ve also been in experiences where I’m just there supporting and trying to give advice and trying to lead the team that way.”

Verhoeff is focussed on serving his teammates at the Olympics, which makes it appropriate that his appearances on the court have mainly been serving!

At the end of the first set against Brazil, Verhoeff entered the game to serve with Brazil sitting on match point. One error could have seen Canada lose the set. Instead, he calmly sent a float serve directly between two defenders for an ace, then continued to serve as Canada rallied back to win the set with four straight points.

But Verhoeff had to watch from the bench as Brazil took the next three sets. Still, he could be seen encouraging his teammates from the sidelines for the entire game, as he has done all tournament.

“Rudy lead our team at Trinity Western University and our AIA camp staff as a lead coach by serving others first. He was a great player and a great camp coach but his actions always spoke louder than his words. He was passionate about doing and being his best to serve God through serving others.”

Trevor Froehlich, the national director of Athletes in Action, Canada, had a chance to mentor Verhoeff at AIA’s National Training Camp (NTC) and was impressed more by his character than his athleticism:

“I observed him to be a humble, inspirational leader, who led by example. He encouraged others, gave opportunity for others to shine, and never seemed to be in need of the lime-light.”

Verhoeff’s attitude brings to mind Paul’s words in his letter to the Philippians: “Have this mind among yourselves, which is yours in Christ Jesus, who, though he was in the form of God, did not count equality with God a thing to be grasped, but emptied himself, by taking the form of a servant, being born in the likeness of men.” Philippians 2:5-7 (ESV)

Instead of seeing Olympic glory as something to be grasped, Verhoeff is dedicated to serving and encouraging his teammates. While the performance of Canada in the volleyball tournament has been inspiring, Verhoeff’s quiet example of servanthood has been just as inspirational.