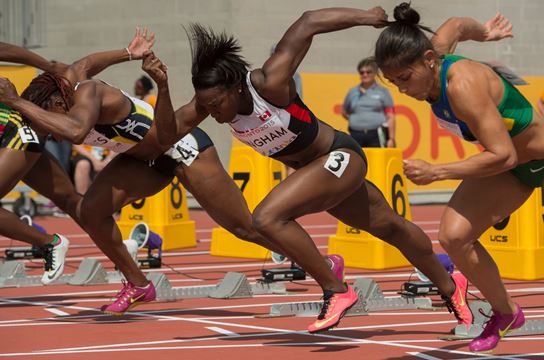 One of Canada’s medal hopefuls in the 2016 Summer Olympics was initially inspired by one of Canada’s greatest Olympic disappointments. At the 2004 Olympics, Perdita was the favourite to win gold in the 100m hurdles, but in the final, she hit the first hurdle and crashed to the track.

As Perdita sat on the track, devastated, a 10-year-old Khamica, over 8000 kilometers away, was caught up in the emotion of the moment.

“My first Olympic memory was Perdita,” says Khamica. “I didn’t know what it was, there was just this race. Everyone was getting all amped up about it, talking about ‘Perdita, Perdita, Perdita.’ And then when she fell, the emotion in the room changed.”

Up until this point, she had never even thought about the Olympics, but the way her family reacted to the race, both the highs and the lows, captured her attention: “I was just like, ‘I want to do that! I want to do something where I’m on TV and everyone’s cheering for me and hoping that I bring home a gold medal.’”

Twelve years later, Khamica’s dream is on the verge of coming true, as she heads to Rio de Janeiro in August for her first Olympic games, carrying Canada’s hopes for a medal in the women’s 100m and running the anchor leg for the 4x100m team.

As a sprinter, Khamica craves the speed and simplicity of the 100m, but her journey to the Olympics has had its fair share of complications.

“As athletes,” she says, “we just want a straight path. But anything that we really want—our true dreams—it’s never that easy.”

The first obstacle came when she could no longer pursue her chosen sport, which was gymnastics, not track.

“My two siblings went to university, so my parents were trying to pay for their tuition as well as my gymnastics fees,” she says, “But there was a part of me that always had a love for track. I just knew instantly once I was done [gymnastics]: track is what can take me to the Olympics.”

She quickly found success in the sport, winning high school championships and competing on the world stage. Her athletic career hit new heights in 2015, but it was a tumultuous year filled with both triumph and tragedy.

Through it all, her faith kept her focussed as she learned to trust more and more in God’s timing. It’s fitting, then, that 2015 started with a landmark event in her spiritual journey.

“In January, I was talking to Herbie and verbally gave my heart to Jesus,” she says.

That would be Herbie Kuhn, Athletes in Action staff member and the chaplain for the Toronto Argonauts and Toronto Raptors, who has been providing the same service for the Olympic sprinting team. With the constant training and travel, it was tough for Khamica to keep connected to her church, so having Herbie available to the team to lead Bible studies and provide spiritual mentorship bridged the gap.

“I’ve always had a belief in God,” says Khamica, crediting her mother for teaching her about faith growing up. “And I’ve always wanted to know more about God, to work on that relationship and get closer. But my walk with Christ really happened when I met Herbie.”

In March, Khamica raced in the CIS Championships, winning gold in the 60m and setting a new Canadian university record in the process. But later in the month, tragedy struck.

While the Canadian sprinters were training in St. Kitts, Daundre Barnaby, who competed for Canada in the 400m at the 2012 Olympics, died while swimming in the ocean.

Khamica and Daundre joined several other teammates at the beach to cool off after a workout. “We were in the water and he was just a little bit further out than us,” she recalls. “I didn’t even realize that he was asking for help. By the time one of our teammates tried to actually help him, he was getting too far out and he drowned.”

Herbie was there the next day to support the athletes as they grieved and returned to training with heavy hearts. Khamica was particularly impacted.

“He was like a brother,” she said at his funeral a few weeks later and talked about how he made her laugh and was always there for her. Looking back now, she recognizes that his death gave her a new perspective.

“It made me realize how short life is,” she says, “and it really brought me closer to God, learning to rely on him and depend on him. To not take things for granted.”

“I’ve learned to stop complaining so much,” she adds, “because one day when it’s all over I’m going to really miss it and regret it. I think about Daundre and I think about everything that he wanted to do, so he’s my motivator: I try and do it for him.”

That was the mindset for her and the rest of the team heading into the Pan Am Games in Toronto that July.

Khamica made the final for the 100m, finishing 6th behind some of the fastest sprinters in the world. But the true highlight came a few days later as she ran the anchor leg for the women’s 4x100m relay.

With Jamaica and the USA running neck and neck for the lead, Khamica received the baton for her run with the runner from Brazil breathing down her neck. Khamica ran hard to the finish, dipped hard at the line, and held off Brazil for bronze.

“That was one of the best feelings that I’ve ever encountered in track,” she says. “We got a bronze, but I felt like we won gold. Because it was at home, knowing that my parents and my friends were in the crowd, it felt like we were at the Olympics.”

“To finally get that medal and for us to be in Toronto where everybody’s watching and wants to support us and cheer for us, it was perfect.”

2015 saw one more success for the 4x100m team, as they broke the Canadian record at the World Championships in August, even though they finished off the podium. Now, in 2016, Khamica has a different record in her sights.

The Canadian record for women in the 100m is 10.98 seconds. It was set nearly 30 years ago by Angela Bailey.

While Khamica has run a wind-aided 11.0 seconds, she has never broken the 11-second barrier, a defining moment for elite female sprinters. Her personal best is 11.13 seconds, set during the Pan Am 100m final.

“Once you go under 11 seconds,” she says, “anything can happen at that point. So right now we’re looking through my race plan and figuring out my weaknesses and my strengths and how we can improve so that by the time Rio comes, I am at my fastest.”

In order to reach the podium or even just the finals in Rio, Khamica feels that she will have to run a sub-11 race. The slowest qualifying time for the finals in the 2012 Olympic Games in London was 11.01 seconds.

“That’s why I feel that record has to go,” she repeats. “It has to go! The sooner the better, especially in a year of the Olympics where it really matters, this is the year where everything has to come together.”

That straight path she desires took one more unexpected curve this year when she suffered a knee injury. The injury will keep her from competing in the 200m event in Rio, for which she had already qualified.

“I had a cartilage tear in my knee and a fat pad impingement,” she says. “It took me out for about a month and a half of my training, so I’m just getting back now. My therapist and coach agree that I’m going to stay away from the 200 this year, because we don’t want to have any setbacks or risks running on the turn.”

For Khamica, the injury has been a lesson in patience and also in trusting God’s timing. The upside for her is that she is now able to focus solely on the 100m event. She hopes that devoting all her attention to the 100m will make her that much better in Rio.

As she sets her sights on success at the Olympics, she recognizes that success doesn’t define her, as her growing faith has helped her define a different path.

“Obviously as athletes we want to win,” she says, “But it’s about doing your best, glorifying God, and knowing that it’s him that gives me the talent and the blessing to do what I do.”

“Herbie’s the one that taught me about that,” she adds. “In everything I do, I glorify God. God created me and I just want to make sure that I’m doing what he has made me to do.”